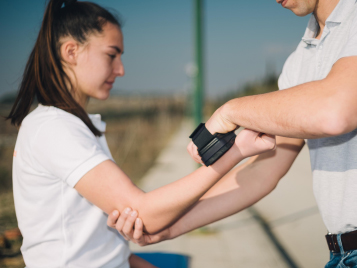 The K-Force Muscle Controller is the perfect device for the isometric strength measurement on the major muscle groups.

For example, you can measure the strength on the hamstrings at 45° (c.f the illustration on the top). However, it subsists an existential question asked by a lot of physiotherapists: Do the results are really relevant compared to expensive machines like the isokinetic ? The answer is YES! Take a look at the chart below:

Chart extracted from the Yoon study : Isometric and Isokinetic Torque Curves at the Knee Joint ; 1991

The K-Force Muscle Controller is a hand held dynamometer. Dynamometers have been widely used both in studies and for clinical uses. The isometric torque measurement curve follows the same pattern than the isokinetic torque measurements assessed at a low angular velocity. This chart is a part of a full study made by korean scientists who have proved that whatever we want to measure, the isometric technology like the K-Force Muscle Controller could be enough accurate compared to isokinetic best technologies.

That’s why we offer our product for a maximum effectiveness at a lower price. Connected in Bluetooth with the K-Force application (available on Android/iOS), you can monitor the progress through different kind of charts to help you analyse and compare your patient results. Clearly, it requires some appropriate use precautions like the direction of the sensor according to the exerted force and the standardization of the measurement (distance between the sensor and the engaged joint). Some physiotherapists are full of imagination and use strap systems or fixing accessories in order to standardize at most.

In the scientific literature, the reciprocal muscle group ratios are well known to be an indicator of the muscular balance or imbalance around a joint. Like the one below allowing a turnkey antagonist ratios analysis:

Progress view of the K-Force App : Antagonist muscle groups strength overlay over the time for an injury occured between the two first measurements, the orange and blue curves correspond repectively to the left and right and the heavy and dashed respectively to the quadriceps and hamstrings

Now, you can work most efficiently and for a reasonable price. So what are you waiting for? Join the K-Force community!