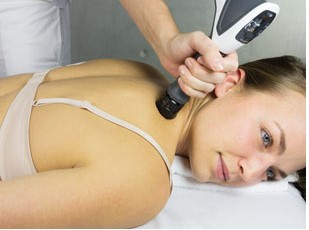 Operative procedures are considered gold standard in the treatment of scaphoid nonunion, albeit their considerable complexity and the risk of intraoperative complications. High energy extracorporeal shockwave therapy (ESWT) offers a non-invasive treatment option for scaphoid nonunion. The aim of this study was to explore the rate of bony consolidation and further outcome variables in patients with delayed union of scaphoid fractures and scaphoid nonunion treated with ESWT.

Due to delayed union (21) or nonunion (21) of a scaphoid fracture 42 patients (37 men, and 5 women) with an average age of 48,3 (15-66) years underwent ESWT followed by immobilization in a forearm cast including the proximal phalanx of the thumb for 6 to 8 weeks. In 13 patients the fracture was initially treated, 8 with immobilization, 5 with screw fixation. In 5 of the 29 patients without an initially treatment, the fracture resp. nonunion was secondarily treated with screw fixation (2) or a medial femur condyle (3) but failed to heal. 10 to 12 weeks after the ESWT bony healing was controlled with computed scanning in the long axis of the scaphoid. If 50 % of diameter of the scaphoid showed trabecula bony healing was considered. Factors with potential influence on bony healing (site of the fracture/nonunion, scapholunate angle, patient´s age, Body Mass Index, smoking and alcohol consume) were analyzed. In addition, 34 patients underwent a clinical follow-up examination including DASH and Mayo Wrist Score, pain analyzes (VAS).

Seventy-one per cent of patients showed scaphoid fracture consolidation using ESWT. In 7 out of 8 patients with conservative treatment and in 4 out of 5 patients with screw fixation of the initial fracture bony healing was achieved. From the 5 patients with secondary surgical treatment of the scaphoid only 1 patient, treated with a medial femur condyle, failed to heal the scaphoid. 15 out of the 24 initially non-treated scaphoid fractures healed. The time between ESWT and the documented bony healing averaged 8.4 months (256 days). Neither fracture site, nor the scapholunate angle, alcohol and tobacco use, as well as biometric factors, such as age and BMI had influence on the success rate of the ESWT. Side effects of the ESWT were limited to local skin irritations and petechial bleedings.

ESWT has a positive effect regarding bony healing of scaphoid fracture with delayed fracture healing and nonunion with a success rate of 71 %. The complication rate is low, and the clinical results regarding wrist motion and pain are satisfying. Further investigations are necessary to evaluate the input of fracture/nonunion characteristics like the morphological appearance on bony healing.